My hometown of Pine Bluff, Arkansas sits on the edge of the Delta. It is an old river town that still bears street names left by French traders that used it as a trading post. My great-grandfather’s civil war unit, the First Indiana Cavalry, once fought the Confederates on its streets. Some of its original buildings dated back to the 1700s.

There is one there that holds a special memory for me. It is in the oldest part of the city and I have been told that it once housed a department store. When I was young, it was a movie theater—The Community Theater. It cost a dime to get in and a dime for a box of popcorn. A machine dispensed a cup of Coca Cola for a nickel. So, for a quarter each, my cousin and I could ride his bicycle down and spend an afternoon immersed in two features and four cartoons.

It was unusual in that you entered with the screen behind you. At the far end was a “crying room.” Mothers could take fretful children into a sound-proofed enclosure and watch the movies with piped-in sound. The whole thing wasn’t much larger than a cathedral living room in one of these modern “McMansions.” It provided magic, though, pure magic.

The old building quit showing movies years ago, but loving owners kept it in workable condition. Now, it enjoys a new life as a performance venue. See the photo below (thanks to Doug Smith and Paul Perdue) to see its reborn magnificence.

Our downtowns are getting old. The buildings are getting feeble. But, with the cost of developing new ground, and the long-term financial burdens of urban sprawl, we may now be seeing more rebirths of the old friends that served us so well. In the words of the Bard, "'Tis a consummation devoutly to be wished."

There is one more thing worth mentioning. Since the building had no balcony, its magic was limited, when I was young, to white people. Times have changed, thank goodness. Now, the “new” old gal will serve all. I hope she is happy about that. I know I am. 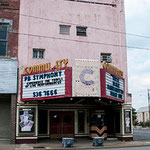 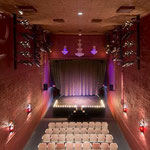