Harriet Tubman was born somewhere around 1820 to 1825 to enslaved parents in Dorchester County, Maryland. Given the name “Araminta,” she changed it to Harriet when she married John Tubman inn1844.

She escaped from slavery in 1849, fleeing to Philadelphia. She recalled later that when she crossed the border into the free state of Pennsylvania, she thought, “When I found I had crossed that line, I looked at my hands to see if I was the same person. There was such a glory over everything; the sun came like gold through the trees, and over the fields, and I felt like I was in Heaven.”

Not satisfied with her own freedom, she lived to help hundreds of other slaves escape to freedom through what was known as “The Underground Railroad.” This was an organization of sympathizers known as “conductors” that helped move runaway slaves from one safe hiding place to another until they reached freedom, some traveling as far as Canada.

She died in 1913 and today is remembered as an icon in the struggles of African-Americans for freedom. She is honored by a statue in my city depicting her leading a child to freedom. I walk be it frequently and am always moved. Now, it is even more meaningful.

In Cincinnati, Ohio, a key station on the Underground Railroad, is the National Underground Railroad Freedom Center. It was my pleasure to visit there last week. One of the main exhibits was a restored slave pen found on a farm nearby in Kentucky. One can only imagine the joy of a person escaping such confinement to find a freedom that we so take for granted.

Harriet Tubman once said, “I had reasoned this out in my mind, there was one of two things I had a right to, liberty or death; if I could not have one, I would have the other.”

Those are words worth remembering. 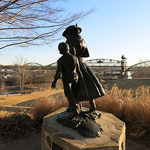 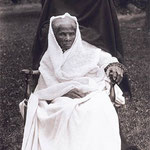 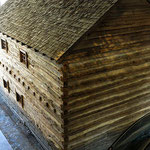