History has bestowed its favors unequally among the cities of our state. Areas wracked with poverty in the early 20th Century are flourishing while areas that were once supported by agricultural workers are dying. Nowhere is this more pronounced than in the Delta region of our state.

Last week a friend and I went “wandering” in the Arkansas Delta. Taking an old highway long ago replaced by Interstate 55, we came across one of those struggling communities. While we were taking photos of ruins that had once been proud buildings, two long-time residents came around and began to tell about the dying of their town. It is a history far too common in the area.

Now supporting a population of less than 600, the town was once a proud city of over 2,000. It boasted, according to our historians, department stores, groceries, a theater, a hotel, and churches supporting numerous types of congregations. Today, most of the functioning buildings house the remaining churches. The water towers are rusting, and the streets were deserted while we stood and talked.

They told us how, in the old days, they would rope off several blocks around the spot where we stood and have Saturday nights for dances that would fill the streets with people.

The town supported a much larger population of course. These included some of the many farm families that once dotted the Delta countryside. They depended upon the town for groceries, dry goods, farm supplies and equipment, as well as human interaction.

It is easy to blame the demise of such communities and their businesses on big-box retailers or an interstate highway system that favored some cities over others. We must add to this, however, the disappearance of the farm populations. Near the end of the 19th Century, there was a 27.5 acre/worker ratio in farming. Today it is more than 740 acres per worker, probably much higher among the larger corporate farms. Now, Farm and ranch families comprise just 2 percent of the U.S. population.

Workers like the one pictured below were among those supporting Delta communities. He lived in my hometown of Pine Bluff, Arkansas in 1938 and worked nearby, paid by the day $0.75 per hundred pounds picked. It is said that the best pickers could pick 300 pounds per day. Such workers supported our family grocery store when I was young. They disappeared long ago. Now the cities such workers supported are disappearing as did the family farms and family groceries.

Men such as our historians, pictured below, still remain to tell their story, and it is a sad one. 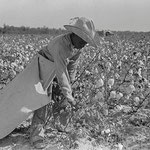 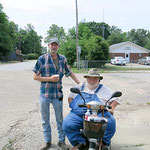