Of the many people who have worked the old farm of ours in Wattensaw, Arkansas, eight names are lost to us forever. It will remain a mystery for all time.

Their only note in history is a single digit beside the name of Jacob Deal in the land records of 1861. They were but a few of the nearly four million slaves in America at the beginning of the Civil War.

Unlike most of us, they might have known their exact market value. The eight were assessed at $4,800 or $600 each although values varied according to age, sex, health, skills, and other factors.

Some are no doubt buried on this farm somewhere. Old timers once spoke of seeing mounds in the area and, since the indigenous Native Americans were not mound builders, the best guess was that the mounds were the remnants of slave graves.

Slaves were not as plentiful in Arkansas as in other states, although we now accept the fact—most of us anyway—that a single human being in force bondage was one too many. The map below shows the distribution of slaves in America in 1860. Concentrations in our state centered on the eastern Delta and the Arkansas River valley. This is farm country, Arkansans didn't buy slaves to serve as maids and butlers on palatial estates like the Virginians did.

It is always interesting, on a quiet spring evening with drink in hand, to contemplate the lives of those who have lived on or near this farm. Too often, we credit the hard work that preserved it to the line of white landowners that have passed through since the 1830s. We must not forget the other hands that toiled here and now lie in unmarked spots. The remaining sign of their lineage is a small African American church a mile and a half or so from here, Macedonia Baptist, still attended by their descendants.

Sometimes we uncover a crumbling brick, obviously homemade, and wonder if the hands of long forgotten slaves might have made it. We should imagine that is the case, fashion a shrine from some of the bricks, and call it “To Hands Unknown.”

William Faulkner, the iconic Southern writer wrote that slavery represented a curse on the South that would last for generations. Looking at the map below, we can only hope for the lifting of that curse someday. 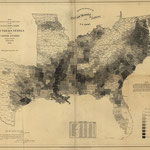 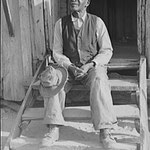