Next door to our farm at Wattensaw, the yard of a neighbor used to contain a huge iron pot big enough that you could have boiled missionaries in it. A younger person might have imagined that was its purpose, but to me it hearkened back to a time when life was more predictable than it is today.

You see, when I was a kid, Monday was washday. Tuesdays were for ironing. This was a law of the Universe as stable and predictable as the phases of the moon. And washing, far from the “lift a lid” luxury of today—a process so simple that even men can do it—could be a tortuous and backbreaking affair. It required focus, hard work, and a bedrock belief in a better life to come. And of course it took all day.

I can barely remember the old iron pots, not as big as the one mentioned above, with a fire underneath and a washboard nearby. At our house, those gave way to indoor sinks in a “wash house” my father built. Eventually devices appeared that actually wrung the water from clothes with twin rollers that were first operated manually and later by electricity. No more wringing clothes by hand. You just took them straight to the clothesline.

Somewhere along the line, they added bluing to the water to make the white clothes whiter. I have heard stories of saving the bluing water to bathe the young ones in, but I don’t think I ever experienced the thrill.

We eventually took down the old clothesline at the farm. It consisted of sections of utility poles bearing huge cypress crossbeams. Today’s version is flimsy circular thing that gets the job done but offers nothing to suggest the stability and strength of life. For the internal support of the clothesline, my mother used long tent posts left by the Red Cross after they set up temporary shelters following the tornado that devastated our community in 1947. Most folks used sweetgum saplings.

One must pity the modern youth that has never smelled or felt a garment dried by the Arkansas sun.

Modern advances created machines of such ease of operation that washing and drying clothes didn’t require that the family set aside an entire day for it. It is now more of an “as needed” process, and perhaps that creates a nervous life in which the earth doesn’t feel solid beneath our feet. Of course no one would want to return to the life of drudgery represented by iron pots and washboards.

But when we lose reliability and stability in our lives, we risk descending into a world of such anarchistic thought processes that we end up spending our days wandering aimlessly and punching meaningless messages into a cell phone. 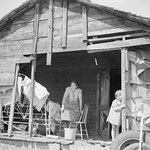 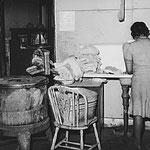 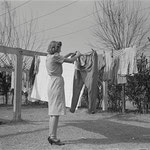