It’s funny sometimes how childhood memories deceive us. A hill that we remember as soaring in its grandeur, from whose summit “go-carts” sped at unimaginable speeds, now looks like a little hump in the flat landscape. A mighty water course that might have carried our rafts to the ocean and beyond turns out, in the cold reality of adulthood, to be a muddy, sluggish bayou. Places and things never seem to be as we have held them in our memories for years.

This turned out to be not so when we went searching for “Aunt Ruby’s House” in the Arkansas Delta. She was a favorite of Brenda’s and the periodic pilgrimages there to visit with aunts Ruby and Lorena form a cherished childhood memory.

She hadn’t been there in years, many years. But she knew it was “somewhere close to Marvell” Arkansas, a town near Helena where Robert Johnson once sang the blues and just south of Turkey Scratch where Levon Helm was born. That’s a pretty large area.

The facts that it was “near Cypert Cemetery,” was “the last house before you get to a big creek”, and “had a porch swing” may have narrowed the search somewhat, but not much. But, we went looking anyway. One can’t go wrong wandering the same roads that Robert Johnson and Levon Helm may have travelled.

It is amazing how many long, straight, paved roads there are in the Delta. They can create confusion and carry you far in the wrong direction, especially when one is searching for a home one hasn’t seen in nearly 50 years, one that probably isn’t still standing.

Coming to a spot on the road between Marvell and Elaine, we stopped long enough to determine it wasn’t the place. As I turned the car around, I saw a man walking to his mailbox. Breaking the long-standing stereotype of the man who won’t ask for directions, I suggested we seek his help.

We did. Brenda not only made a new friend but discovered that the gentleman knew both her aunts and, further, could tell her exactly where the hose was. We, of course, were headed in the opposite direction.

So, we found Aunt Ruby’s house. Not only did we find it, it was still located just before you get to a big creek. And it was a big creek. In fact, its name is “Big Creek.” Stranger still is the fact that the house looks just as Brenda remembered it. Watching her see it and vicariously enjoying the flood of emotions it evoked made me want to keep wandering Arkansas.

And I think we will. Who knows? That go-cart hill may have gotten higher now.

When you finally go back to your old home, you find it wasn't the old home you missed but your childhood. -  Sam Ewing 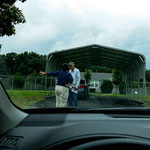 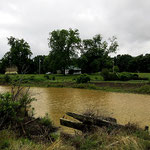